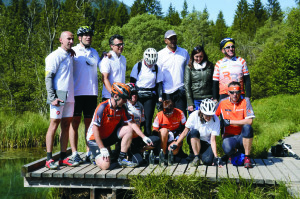 COVID19. is main and the only reason taht our plans are reposit to 2022. Every other detail of our plan remains!

Seven years ago Rekreatur team took part in the first promotional cycling tour along the Sava River, organized by the Sava Commission, which takes care of the development of the Sava River Basin. Two cyclists from Slovenia, Croatia, Bosnia and Herzegovina and Serbia took part in the promotion of cycling throughout the route. And as soon as I first contacted them, I felt  that establishing a Zelenci – Bohinj – Belgrade cycling route have enormous potential for the development of cycling and business opportunities throughout the Sava River Basin.
Like all great ideas, this one swarms very slowly throgh my mind and after a lot of coordinations an discussing with public institutions and the private sector of the entire area that cold be involved in the preparations…
I DECIDED – in 2021 we will do promotional cycling modeled after the experiences of Rekreatur and will cycle the entire route with the aim of obtaining all the necessary information and experience that will be necessary for SAVA Tour 2022 to be organized and carried out just like Rekreatur was!