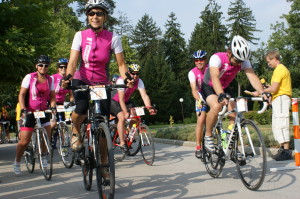 Rekreatur 2013: team No damage for me

Above all, former competitors of Rekreatur are the ones who tell you the most about us. It seems these guys are very pleased with four days of cycling fun!

Team: Prošport, Damjan*
(*Damjan Fras, winner of a bronze medal in the 1989/ Salt Lake City Winter Olympics)
“We had four wonderful days that completely recharged our batteries. We just cannot wait for the next Rekreatur.”

Team: Adria Airways, Brane
“We love routes that avoid main roads wherever possible. Dvor – Žužemberg is just one of them. If only all teams would stick to that! Orientation has its own charm!”

Team: Spirit of Golnik, Aleš
“Thanks and best wishes to all the other teams for the great atmosphere, kilometres, sportsmanship and comradeship on the road and in the evenings! We are also very pleased because, besides cycling, we didn’t have any other responsibilities, so at least for a few days, we could easily forget about work! ” 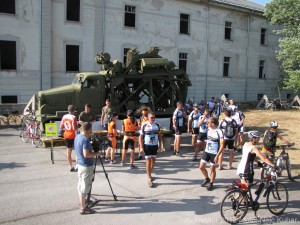 We caught the media’s attention with innovative and professional products that are full of emotion and positive energy. With this energy we are creating a wide response event. The “Silver Sower Award 2008“, for an innovative approach in tourism granted by Slovenian Tourist Board help us to became known. The journal Tourism, which was released in March 2014, we were pushing the chosen ones

Miroslav Braco Cvjetičanin, Kranjčanka – September 2009
“RekreaturTM is simply the most interesting recreational cycling event that you can imagine. In a few days we get plenty of cycling, socializing and sightseeing, passing through the most beautiful Slovenian villages, towns and cities. All this mixed with the great fun and excitement of a race.”

Mateja Gruden, NeDelo – August 2012
“The barracks have fallen, they have been overrun with…cyclists! Inside and out was swarming with cyclists! It should be said though, they were dressed rather strangely and with a bit too much colour. And they were talking to military personnel in too friendly a manner. Of course, we are talking about the former barracks that is now a military museum and where, on Thursday afternoon, the first checkpoint of Rekreatur – team cycling around Slovenia, took place.”