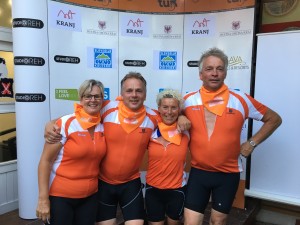 Oranje Tulpen, Oranje Klompen and Kranjska klobasa team application have doubled the number of teams seriously preparing for this year’s Rekreatur! The Dutch team, Oranje Klompen, last year’s orange jersey winners, apparently decided to defend the flattering title. According to unverified information, they are seriously training along the Nederlands northern shore of the North Sea, as there is always a strong wind in the cyclist’s chest (my personal experience) and the best terrain for serious slope training. Serious slope is waiting us in the 2nd Stage when we will climb to Šenturška gora under Krvavec.

More than half days passed in May almost as much as our preparations for this year’s Rekreatur. Now we are finishing definitive trails of Prologue and three stages. There will be no big changes. Perhaps the biggest will be on Prologue as there is teh new highway overpass in Šenčur the first in Slovenia intended only for cyclists and pedestrians. Also, the 3rd Stage will have minor changes in the area of city centre Ljubljana.