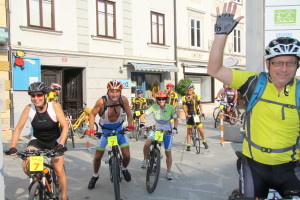 Despite uncertainty about the organization of events such as Rekreatur, there was an obvious gust of wind among his ‘followers’. The optimism of the organizers was joined by the first three teams with applications. According to tradition, here are the Dutch ORANJE  TULPEN with two teams joined and also the first Slovenian team KOLONCE from Logatec.

I invite you to take a look about this year tracks and maybe join us with your application.

We are still waiting for the instructions of the governement and responsible institutions regarding the organization of major excursions or events, including Rekretaur, but we believe that its implementation will be possible in the form as we know it.

We are especially pleased to announce the second Dutch team Het JONGE ORANJE TULPEN, which is a kind of ORANJE TULPEN baby team. It is led by Masha, who is a purely Dutch-born woman of Slovenian descent. She is featured in a promotional bike video of the city of Amsterdam.