From this momet you can already SIGN UP to the REKREATUR 2019. For the fourth time in a row, we will discover Gorenjska region with its capitol the city of Kranj. We will start on August 22, 2019 at 17.00 with a prologue at the Main Square in Kranj. The routes we are planning to take will lead [more] 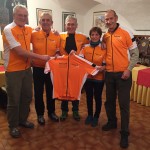 At an occasional ceremony at the Stari Mayr restaurant in Kranj, at the end of 2018, we were awarded orange jersey for a team BACTIM, the winners of the REKREATUR 2018. This is last action of Rekreatur 2018 and the starting point for planning the next one. As it seems now, REKREATUR 2019 will be [more]

The year 2018, which brought us many more beautiful than bad moments is passing. The Tourist Association Rekreatur was renamed to ‘Rekreatur, the Association for Tourism and cycling developmnet’, thus emphasizing the activity that we have been carrying out since our very beginning in the distant year of 2006. Cycling in Slovenia finally gets its [more] 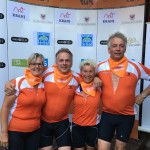 Oranje Tulpen, Oranje Klompen and Kranjska klobasa team application have doubled the number of teams seriously preparing for this year’s Rekreatur! The Dutch team, Oranje Klompen, last year’s orange jersey winners, apparently decided to defend the flattering title. According to unverified information, they are seriously training along the Nederlands northern shore of the North Sea, [more]

The BACTIM team, who has registered as third team, has a member Miran, who participated in all of the Rekreatur events and it makes him a ‘LEGEND’. Does this mean that together with Jambor teams they will take over Rekreatur? If this really happens, we will be the most satisfied organizers. Teams will not need escorts [more] 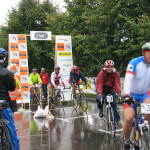 Legends returned! The Jambor team, known as ‘Rekreatur legends’ was the first to apply for Rekreatur 2018. Even more, enhanced with some team members of ‘HK’ TASTAR’ team they have applied as two teams! The Jambor No ONE consist of female cyclists and the Jambor No TWO is the male part of the aforementioned teams. We [more]

After TEAM APPLICATIONS  the tracks of Prologue and three stages of this year Rekreatur are known. They are about 270 km long with aproximately 2600 m of ascents and descents. Mybe there will bo some changes on them because we haven’t cycle them yet. And they will need to be changd as there are some [more]

From today (04/02/2018) on, you can already  apply on Rekreatur 2018. We have prepared two packages – Rekreatur BASIC and Rekreatur FULL. The only difference beetwen them is the fact that in ‘BASIC’ there are no warm meals by prologue and three stages and a promotional T-shirt Rekreatur. Everything else is unchanged. And that include interesting [more]

From the 31st of January to the 3rd of February, the 29th tourism fair NATOUR Alpe Adria will be held in Ljubljana and we will be there  again. This year we will be even more active since you will find us almost everywhere. In addition to the traditional stand in the hall of the Tourist [more]

We wish all the best and all good of the rest to all cyclists and their supporters in rapidly coming New Year 2018. If all our activities as Rekreatur Society will come true at least in 50% of the efforts that we performed in the field of cycling in Slovenia then in 2018 we will [more]